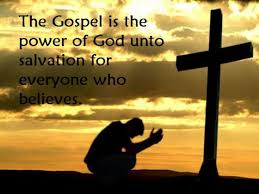 What is God’s Forgiveness?

Colossians 1:13-14, “For he has rescued us from the dominion of darkness and brought us into the kingdom of the Son he loves, 14 in whom we have redemption, the forgiveness of sins.”

God’s forgiveness through the Gospel means that Jesus paid the debt for our sin that you and I could never pay. He literally gave us the opportunity to be rescued from darkness (separation from God) into an intimate relationship with Him through personal faith in Jesus. That Jesus shed His blood on the cross for our sin debt and then rose from the dead on the third day alive and is saving all that call upon His name. Through that personal faith we are redeemed from death to eternal life.

Why can’t God just forgive the debt of sin? If our Creator was truly generous, couldn’t he just move on without repayment? Live and let live? Here’s the problem: someone always eats the cost of sin. As a simple example, let’s say your neighbor crashes his car through your fence. When you discover the shambles, you forgive him: “Don’t worry about the fence! All is forgiven.” But forgiving your neighbor doesn’t do away with the bill or dissolve the damage; it means you eat the cost.

Now consider a more complex example. During the U.S. housing crisis, shoddy banking practices, fat-cat executives, and corporate corruption threw a sledgehammer into the global economy. Now, imagine Jesus is installed in the aftermath as the new CEO of one of the massive corporations guilty for the crisis. The old CEO is out the door; a new boss is in town. Jesus is personally innocent: he wasn’t behind the wheel when the ship got steered into the rocks. But there’s still a huge debt. Bank of America alone owed people $17 billion.

Someone has to pay the costs. Here’s what actually happened: in the aftermath of the housing crisis, the banks were deemed “too big to fail,” and the government forgave the debt, covering the most expensive bailout of human history. Though the banking industry had caused massive damage, the debt was forgiven. But the debt didn’t go away. Someone else covered it—in this case, the American people. Someone always eats the cost.

At the Cross, God was eating the cost of our sin. Why can’t God just forgive the debt? This is what is happening at the Cross: God is just(ly) forgiving the debt—by personally covering the cost. I misspoke earlier when I said the White House gave Wall Street the most expensive bailout of human history. Actually, the most expensive bailout was when the Father established his incarnate Son as the new CEO of a corrupt corporation called Humanity Inc. and together, in the power of their Spirit, they took upon themselves the most outrageous debt-forgiveness plan the world has ever known.

This sermon is part of a series called The Gospel. There are 3 other sermons posted in this series.